Teara Fraser teaches leadership, runs an airline and co-founded a leadership organization rooted in Indigenous ways of knowing and being. But she’s the first to say we need to listen to other leaders. Younger ones like Kiana Alexander-Hill, her friend, partner, peer. Daughter.

“I believe that Kiana and all the young people have the wisdom our world needs. And we’re just not listening,” Fraser says. “We have this idea we are the teacher of future generations. But what we’re missing the boat on is understanding and liberating the teaching that needs to come our way.”

“Teara and I have always been close. She always supported me in doing the things that were important to me and my independence,” Alexander-Hill says. “Part of that closeness has been reclaiming who we are and in our vision for what is possible for young Indigenous leaders.”

Fraser, a proud bridgebuilder and a Master of Arts in Leadership graduate, and Alexander-Hill, a Métis Iskwew storyteller and scholar, MA Leadership grad and researcher with Royal Roads’ ResilienceByDesign Innovation Lab, were recently honoured with Top 100 Awards by the Women’s Executive Network (WXN), with Alexander receiving the Future Leaders Award.

The mother-daughter duo share work in several areas, including as leadership at the Raven Institute, a gathering space rooted in Indigenous ways of knowing and being. Fraser is also founder and director of Iskwew Air, Canada’s first Indigenous woman-owned airline, where Alexander serves as team lead, people. 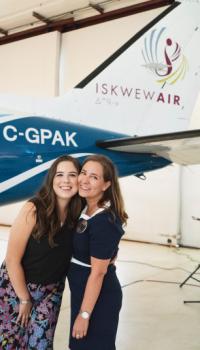 Last year, the unstoppable team are launched plans to shake up the conversation on bridgebuilding, belonging, community, business, youth leadership and adapting to climate change – with the goal of creating a society led by youth and guided by Indigenous ways of knowing.

At the root of their work is a relationship that Fraser posits as an example of interdependence, the underpinning of many Indigenous world views.

“From a relational world view, it is a natural thing to be working with people you care about and working with your relations. Only in the Western world is that something unique or different or strange.

“Think about the forest and how the trees stand beautifully on their own. Under the earth they’re all interconnected, just as Kiana and I are. She is like a tree. She is beautiful and unique and strong and standing on her own. And we’re also connected by our roots — all of us,” Fraser says.

Alexander-Hill says interconnectedness represents much of their work, both together and in individual projects.

“My master’s thesis looks at the concept of belonging with young people in the city of Vancouver, what does it mean to belong for young people and how does that play into complex problems such as climate action,” she says.

Alexander-Hill also recently presented at the Adaptation Canada 2020 conference on how to engage youth in climate adaptation work, on their own terms and in their own ways.

“I believe this time in history belongs to young people and I am honoured to have this as a part of my story,” she says.

Fraser, a PhD candidate in Human Development at Fielding University, recently returned to the role of student as well. She is studying the concept of warriorship.

Both trace their warriorship to their roots and each other.

“Growing up, being a young Indigenous person wasn’t something I was always proud of. For me, it’s been a journey of being proud of who I am and finding ways to support myself and as many other Indigenous young people in their own discovery and leadership journey,” Alexander-Hill says. “Teara has always supported me and we’ve always been in support of each other in our learning journey.”

“Kiana teaches me that we can have it all if we’re brave enough to believe we can, and to show up, to struggle and to do the hard work,” Fraser says of her daughter. “And she teaches me the wisdom of our young people and that every single young person needs to know that they matter and that they belong.”

As part of The Tomorrow Makers campaign for Indigenous student success and research grants, we’re sharing stories of Indigenous alumni who are making a difference in the world. You can help future Indigenous leaders tackle climate change, sustainability and community development for this generation and for those to come. You can be a Tomorrow Maker by supporting one today.

Seeing the world as a garden